Submitted by HedonisticHiking on 5 Feb 2016

Many Hedonistic Hikers who have travelled with us in Italy will have happy memories of the famous after-dinner drink known as grappa!  It is a strong grape-based brandy usually taken at the end of a meal as a digestive and usually served in small decorative flute glasses or classic shot glasses.

There is no question that the flavour is potent and powerful and many people compare it to "firewater" or "rocket fuel" as they describe its "warming" effects!!  But it is a very effective aid to digestion after a heavy meal and is highly alcoholic, usually between 40% - 50% volume, so best taken in small doses! 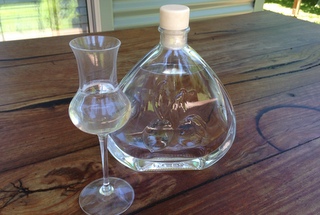 It is made by distilling the parts of the grape discarded after the process of wine-making has taken place, so the skins, stems, seeds and pulp are all re-used in its production. Grappa is usually a clear liquid after the distillation, but as more wine-makers are adding a grappa to their offering, they are ageing it in oak casks which gives the liquid rich amber colours.

Historically grappa would have been made by farm-workers to use up the leftover parts of the grape and create a warming drink for the winter months but now many wine-makers are producing high quality, single grape variety grappas which are smooth, rich and aromatic and can command high prices.

Another way to enjoy grappa, as many Italians do, is to add it to espresso coffee to create a caffè corretto, meaning "corrected" coffee. A variation of this is the ammazzacaffè ("coffee-killer"): the espresso is drunk first followed by a few drops of grappa served in its own glass!

Mick's personal recommendation is made by the Piedmontese distillery Sibona, who make a single grape Barbaresco grappa, aged in oak casks and produced in such small quantities that each bottle is numbered!

Love it or loathe it, grappa should be tried at least once on a visit to Italy as it is a key part of the country's wine-making heritage.  And you know what they say:  When in Rome ....