Submitted by HedonisticHiking on 4 Aug 2020

Walking next to water is endlessly fascinating.  Rivers shape the landscape, affect the fortunes of those who live in their valleys and give life to a huge array of flora and fauna.  Many of our tours include hikes which trace the course of well-known rivers in Europe and Australia, and here we have looked at some of the most memorable.

The Soča River (or Isonzo to give it its Italian name) is a 138 km river that flows through western Slovenia and north eastern Italy. The source of Soča River lies in the Trenta Valley at 876 metres above sea level, in the Julian Alps. The water is beautifully crystal clear, and anyone who has walked with us on our Slovenia and Friuli tour will remember its spell-binding emerald-green colour. Tiny particles of the limestone river bed reflect the sunlight, giving the water its gorgeous turquoise appearance. The river runs through Kobarid where we stay on the tour and on to Gorizia before entering the Adriatic Sea close to the town of Monfalcone.  Before the First World War, it flowed parallel to the border between Italy and the then Austro-Hungarian Empire and during the war was the scene of bitter fighting between the two sides, culminating in the Battle of Caporetto in 1917. On the tour we hike along sections of the Soča and also visit the stunning Kosjak waterfalls, which many believe to be the most beautiful spot in Slovenia. 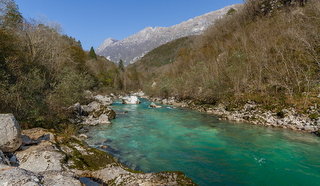 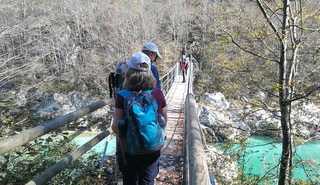 The River Po is the longest in Italy and flows in an easterly direction all the way from the Cottian Alps on Italy's western border to the Adriatic Sea, a distance of some 652 km. There's a boulder at the source of the River Po, with the inscription 'Qui Nasce il Po' (Here Rises the Po), and this is something we always see on our Jewels of Piedmont and Mountains of Piedmont tours, when we hike in the shadow of the Monviso peak. A number of tributaries feed the river from the foothills of the Alps and it flows through many important Italian cities, including Turin, Piacenza and Ferrara before coursing towards its complex delta on the Adriatic coast. The sediment carried by the Po is considerable, and the delta is estimated to increase by 200 acres per year. Ancient ports such as Ravenna, which we visit on our Northern Tuscany and Ravenna tour, are now as much as 10 km from the sea, due to the river's silts being carried down by the Adriatic's currents.  The vast flat plains of the Po Valley make up some of Italy's most important industrial and agricultural areas, growing mainly cereals and risotto rice which requires constant irrigation. 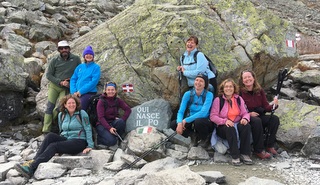 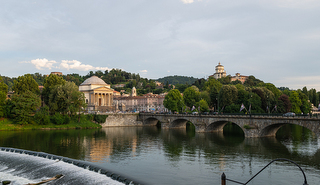 The Ovens River flows literally across the end of the garden in our Australian Hedonistic Hiking home office. In the hot summer months in the High Country this is a real blessing and we have spent many happy afternoons cooling off in its waters.  It rises near the village of Harrietville in the Victorian Alps and flows 191 kms in a north westerly direction, eventually to join the mighty Murray River close to Yarrawonga.  The Ovens Valley through which it flows is home to many wineries, hop farms and fruit farms and tobacco was once also an important crop in the area.  As gold fever gripped the region in the mid 1800s,  gold was found in many places along the Ovens River: in Wandiligong, Bright and in the nearby Buckland River which feeds into the Ovens where we live in Porepunkah.  Our High Country and Bright tour has two wonderful hikes along sections of the Ovens and we unearth much of the river's glittering history. 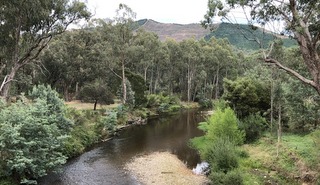 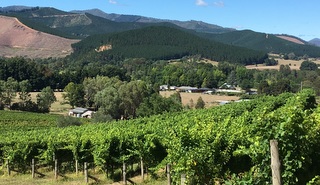