The Via Francigena - Walking to Rome

Submitted by HedonisticHiking on 14 Dec 2015 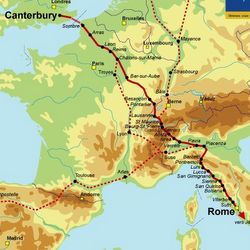 This ancient pilgrim path is one of Europe's most famous routes dating back to the early Middle Ages - a trail which connected Canterbury in England, via France and Switzerland, to Rome and the Holy See.

One of the earliest accounts of the route dates back to 990 AD and was documented by Sigeric, Archbishop of Canterbury, in a diary describing the places he passed through as he returned to Canterbury from Italy after receiving his vestments from the Pope.

Unlike the great roads of the Roman empire which connected one important city to the next, the Via Francigena was more a series of local paths of differing widths and surfaces which connected mountain passes, bridges and, most importantly, villages or abbeys which could offer refuge for the night. Where the route was heavy-going refuge stops were closer together and, conversely, more spread out as the path became easier. Because of the uneven nature of the route it was only possible to complete it on foot. 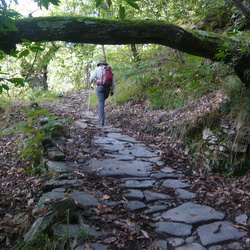 The journey was fraught with difficulties, from bandit attacks to disease, weather to wild animals. Those who undertook the 1900 kms  had to clear all debts before leaving home, write a will and receive special pilgrim garments from the local priest. There were no guarantees that those who set off would return. It was usual to collect souvenirs along the way which proved to everyone back home that you had made it to your destination.

Only a few decades ago, interest in the Via Francigena was limited to scholarly study. However, the experience of hiking the great Camino di Santiago in northern Spain (The Way of St. James) led many to explore the pilgrimage route to Rome on foot as well. Local enthusiasts began to mark the paths and they were helped by religious and local government agencies in a bid to recover the original route. Today most of the Italian sections are clearly signposted and books have been produced with excellent maps, photos and information. 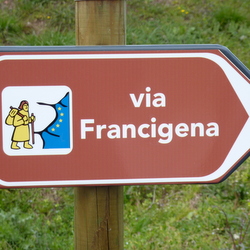 Once through the Great St Bernard pass which connects Italy and Switzerland, travellers on the Via Francigena would pass through the Aosta Valley, Piedmont, Lombardy, Emilia-Romagna, Tuscany, and finally Lazio. Many of our hikes in Italy touch on different sections of this famous pilgrim trail. Our Best of the Italian Alps tour includes a small section of the Via Francigena in the Aosta valley and the name of the first hotel we stay in, the Ad Gallias, translates as "To Gaul" and signifies its important position on the route. Our Parma, Tuscany and Cinque Terre tour sees us crossing from Emilia Romagna into Tuscany at the Passo della Cisa, the highest pass in the region from where the trail descends through the foothills of the Apennines passing many pretty chapels and shrines. Our Lucca, Volterra and Elba tour and Tuscan Harvest tour also visit important sites along the pilgrim trail, as Lucca, San Gimignano and Siena were all key refuge points on the way to and from Rome. 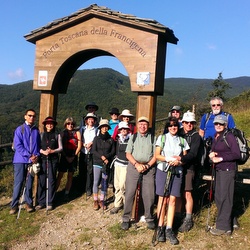 The history of this trail and of those who made the perilous journey back and forth is fascinating. To walk even a small section in the footsteps of such heroic characters is at the same time a rewarding and humbling experience.

The photo shows our Parma, Tuscany & Cinque Terre group hiking on the Via Francigena at the Passo della Cisa in Tuscany.