Submitted by HedonisticHiking on 7 Jul 2020

At Hedonistic Hiking we continue to reminisce about many of our best-loved places in Europe and we are looking forward to being back there in 2021!  Walking by water, whether it be the sea, a fast-flowing river or a perfectly still lake provides the perfect backdrop for many a hike and this month we have reflected on some of our favourite lakes in Italy and Slovenia.

Lake Bohinj lies in a glacial valley and is the largest natural lake in Slovenia.  As the starting point of our Slovenia and Friuli tour, this beautiful landscape gives our hikers a taste of what is to come in this pristine green country. The lake is encircled by the Julian Alps, the highest mountain range in Slovenia, and the reflections in the blue green water of the snow-capped peaks and forests of beech, larch and dwarf pine are spectacular. It's elevation at 526 m means that the water can freeze in winter but in warmer months the lake is popular with swimmers, kayakers and fishermen too.  A 12 km circular track follows the lake shore and at the eastern edge sits the 700 year old church of St John the Baptist which houses some of the oldest frescoes in Slovenia.  We love Lake Bohinj for its crystal-clear water, stunning reflections, peace and tranquillity. 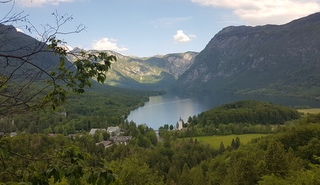 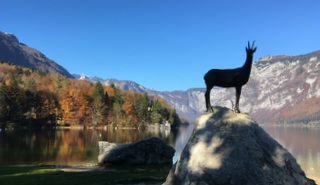 Lake Vico is a volcanic lake, filling the crater formed by a series of volcanic eruptions which occurred well over 100,000 years ago. It is one of the highest major Italian lakes, with an altitude of 510m, and is completely surrounded by forests of largely beech, chestnut and hazelnut trees.  The lake has fabulous sunsets and offers a silent escape from the hustle and bustle of Rome and nearby Viterbo.  On the north shore is the peak of Monte Venere (Mount Venus) and it is thought that the level of the lake would once have been higher, making the mountain an island in the water.  Lake Vico is home to many species of waterfowl along its shores, and pike, perch, tench, and eels inhabit its waters. We stay here at the beginning of our Etruscan Trails in Central Italy tour, in a hotel right on the water's edge, close to the small town of Ronciglione. The whole area is covered by the Regional Nature Reserve of Lake Vico, some 3,200 hectares protecting the ecosystems of the lake and forests. 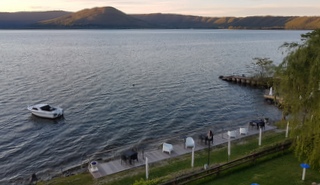 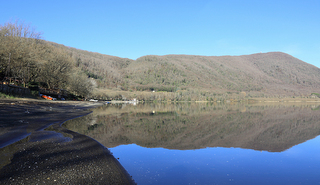 Right on the western edge of Lombardy, where it meets Piedmont, lies the flawless and beautiful Lake Orta.  Much smaller than its closest neighbour Lake Maggiore, Lake Orta has traditionally attracted less visitors than the other Italian Lakes and retains an old-world charm. The lake was formed by glacial action, sits at 290 m above sea level and has a long, narrow shape.  A memorable feature in the centre of Lake Orta is its picture-perfect island, seemingly floating on the surface of the water. The tiny Isola San Giulio is dominated by its 12th century Basilica di San Giulio, named after the patron saint of the region.  On the lake's eastern shore lies the village of Orta San Giulio which is where we stay at the end of our Italian Lakes tour, in the elegant Hotel San Rocco.  We love this lake for its serenity and the village for its charismatic jumble of cobbled streets, pastel-coloured houses and palazzos with flower-filled balconies. 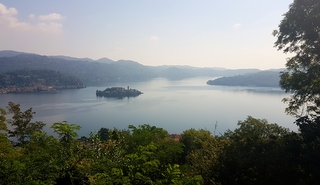 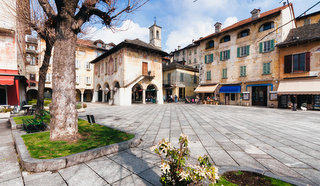