Submitted by HedonisticHiking on 2 Apr 2022

If you've never joined one of our annual Palio tours in Siena in August, your ideas about this horse race might be a little sketchy. As the race has been cancelled for the last two years due to Covid restrictions, 2022 promises to be more exciting than ever and we thought you might like to discover more about one of Italy's greatest spectacles!

It's not a tourist event - it means everything if you are a resident of the city
In fact it’s the biggest event in a Sienese year. Over 50,000 people attend Siena’s civic hub, Piazza del Campo, on race day to witness the spectacle.

The race is the apex of months of preparation
It’s the culmination of on-going rivalry and competition between Siena’s seventeen districts or ‘contrade.’ A palio can take many different forms but is generally a contest fought in traditional dress and can involve horse racing, archery and jousting amongst other activities. The Palio horse race in Siena is a particularly fierce competition with the sacred honour of a contrada riding on each race. 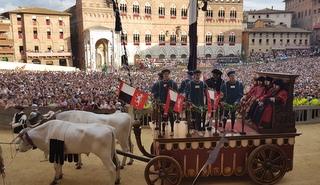 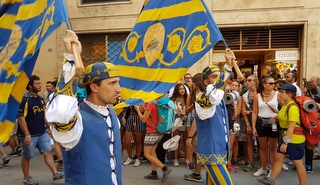 The event dates back centuries
The competition dates back before the 17th Century and the race is held on a sand track in the centre of Siena’s UNESCO World Heritage-listed old town. Exploring the city on foot is the best ways to soak up the history and atmosphere.

The full festivities last four days
The Palio race takes place twice a year, on 2nd July and 16th August, but we want our guests to experience the full 4-day build up to the event. Pre-Palio traditions include la tratta (the selection of the horses) and six horse trials that take place from the evening of la tratta day to the morning of Palio day. Each contrada also holds an open-air dinner in the streets on the evening before the race which we get to enjoy, along with a visit to a Contrada museum and the private art collection of the Monte di Paschi, the oldest bank in the world. 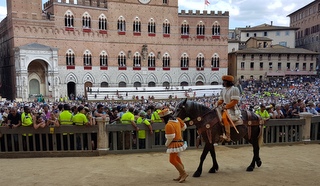 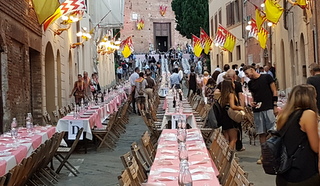 The pageant before the race is equally unforgettable
The race is preceded by a spectacular historical parade of traditionally dressed Sienese. The medieval display includes flag-wavers and a squad of sword-wielding Carabinieri. Jockeys also wear the bright colours of the contrada they represent. To really get into the spirit we always think it's fun for our guests to pick a contrada and cheer them on by waving the appropriately coloured scarf.

Horses are blessed in church before the race
Each contrada brings its horse into its official chapel on race day for a special blessing to obtain divine favour. It’s considered good luck if the horse drops some manure in the church. 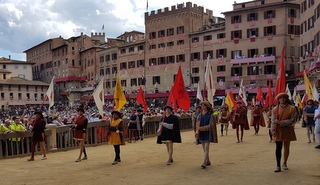 The horse wins the race
The Palio is won by the horse who represents his contrada and not by the jockey. The winner is the first horse to cross the finish line with or without its rider (it’s not unusual to see a riderless horse finish the race). No pure bred horses are allowed and much emphasis is placed on the selection and blessing of the horses. The loser in the race is considered to be the contrada whose horse came second, not last. 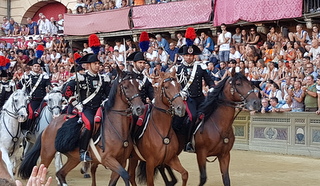 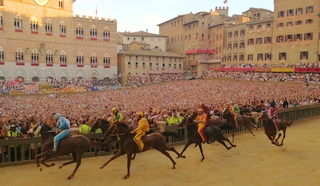 The aim is not just to win, but to prevent your rivals from winning
Part of the challenge is to prevent a rival contrada from winning and, when a contrada fails to win, its historical enemy will celebrate as merrily as if they were victorious. With Sienese pride at stake the competition is fierce and the atmosphere electric.

Grandstand tickets are the way to go
Thousands of people stand in the piazza on race day but we want our offer our guests maximum enjoyment of the event, so we have Grandstand seats which have the very best views.

Our exclusive tour which follows this event, along with gentle walks in the Tuscan countryside, a cooking class of Tuscan classics and dinners in some of the city's best restaurants runs each year from 12 - 18 August.  We have a few spots available for August 2022  so if it's a once-in-a-lifetime travel experience you're looking for this year, then get in touch now!