Six of the best things to do in Orvieto

Submitted by HedonisticHiking on 2 Aug 2019

Unspoilt, intriguing and perched atop a cliff of dark volcanic rock, Orvieto is one of central Italy’s most striking towns.  Its position as one of the most important cities in the region during Etruscan times means there are plenty of the traditional sights that you’d expect to see in an Umbrian hill-top town, but part of what makes Orvieto so fascinating lies deep down in a hidden underground world.

Start with the best viewpoint in town. Standing at the centre of town, the 47m. high Torre del Moro is Orvieto’s highest point, providing spectacular 360° views from its terrace across the curved terracotta roof tiles and the Umbrian countryside. 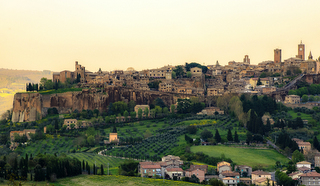 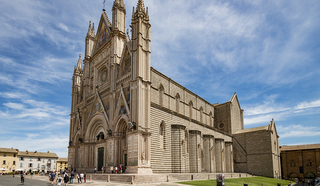 The underground views are as dramatic as the vistas over the town. In fact Orvieto sits above an underground network of over 1200 man-made caves, wells and tunnels, some dating back to the Etruscans. Visit Pozzo della Cava, which comprises a labyrinth of underground passages around an antique well, or St Patrick’s Well. At the latter, two spiral staircases of 248 steps, just wide enough for pack animals to descend and carry water back up, take you 54m underground.

Back on ground level, head straight for the magnificent façade of the Duomo, with its elaborate carvings and mosaics. The interior is fairly stark: once you’re inside, it’s actually the Cappella di San Brizio with its frescoes of the Day of Judgement and Life after Death by Luca Signorelli that mainly draws the crowds. Continue on to the medieval Palazzi Papali behind the Duomo. 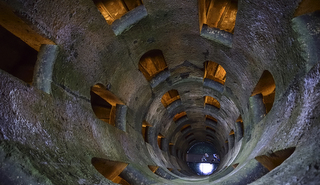 Take a break from potential cultural overload with a little foray into Orvieto’s gastronomic scene. Orvieto produces Umbria’s best-known white wine and is one of the main centres of the Slow Food movement. Dip into a wine bar for a glass of Orvieto Classico or browse the fine food shops selling wild boar hams and salami, pasta, truffles and olive oil.

Find out more about the Etruscan people who inhabited Orvieto for centuries by visiting the ‘Crocifisso del Tufo’ necropolis located on the northern side of the cliff face, just below the tufa cliff. Some of the items from the graves are now housed in the archaeological museum in town. 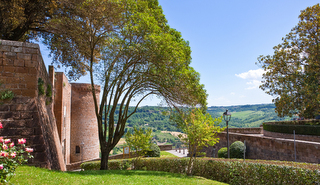 Close to the Piazza Cahen, on the edge of Orvieto, the impressive Fortezza dell’Albornoz was constructed in the 1350’s by the Spanish Cardinal Albornoz, under the order of Pope Innocent VI. Destroyed in 1395, the existing fortress was rebuilt during the mid-15th century.  Today the castle and its grounds are open to the public, providing excellent views across the countryside.

Our Etruscan Trails in Central Italy tour takes us to stay in Orvieto, where we have a day to explore all that this remarkable town has to offer.  It might be worth investing in Orvieto's Carta Unica for €20 per person, as this then gives entry to 11 of the town's most important sites.