The Villa d'Este in Tivoli

Submitted by HedonisticHiking on 3 Nov 2016

The first stop on our Wilds of Abruzzo tour is Tivoli, just on the eastern side of Rome, and a visit to the world-famous Villa d'Este and its astounding gardens. A UNESCO world-heritage site, this former palace of Cardinal Ippolito II d'Este dating back to the 1500s remains today an incredible feat of engineering and a true "Garden of Marvels" which continues to thrill visitors in the 21st century.

Born in 1509, Ippolito was the second son of Alfonso I, Duke of Ferrara and of Lucrezia Borgia, daughter of Pope Alessandro VI. As such he belonged to one of the most prestigious dynasties in Italy and was destined to have an ecclesiastical career from an early age. Although he was never elected Pope, he became a Cardinal at the age of 30 and in 1549 he was appointed to the role of Governor of Tivoli. 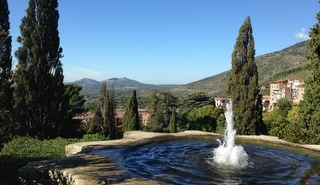 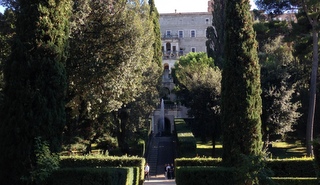 The Governor's house in Tivoli was, at the time, a wing of the convent annexed to Santa Maria Maggiore, but the convent boasted a magnificent site with views across the entire region. With the help of Pirro Ligorio, an Italian architect and antiquarian, Ippolito began to develop plans for his new palace which were ambitious, grandiose and eye-wateringly expensive. That he had to acquire extra land and demolish existing homes and structures to achieve his vision seems not to have deterred him!

By channelling the waters of the River Aniene which flowed through Tivoli a "hanging garden" was conceived to include an unprecedented number of fountains, grottoes and nymphaeums and to explore the effects of water, both visual and acoustic. Behind the waterfalls and fountains lie a complex network of tunnels, canals and underground pipes and the system works on gravity so that, as the water drains from a fountain on an upper level, it feeds the fountains on the levels below. An astonishing spectacle was created at the Fountain of the Organ where a hydraulic organ was played by the action of falling water, and this can still be heard today. 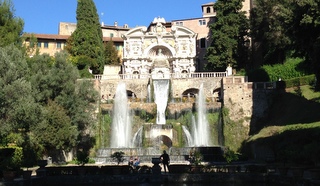 The reputation of the beauty and ingenuity of the Villa d'Este spread and the palace soon became a centre of cultural life, a meeting place for the intellectual elite, writers, artists and musicians of the time.  When Ippolito died in 1572 many of the garden structures were incomplete and his nephew, Cardinal Luigi, inherited the Villa. Over the next centuries the fortunes of the Villa followed the fortunes of the d'Este family who were left in charge - some beginning vast programs of work and others leaving it to slowly decay.  After the first world war, in 1922, the property was passed to the Italian State. The garden suffered bomb damage in 1944 and restoration projects were put into place at that time. With the effects of time and environmental issues caring for the garden is an on-going concern.

For the 21st century visitor there is much to marvel at in this unique space. The fusion of man's ingenuity with the natural geography of the garden, the brilliant use of water and the architectural creations truly cast a spell. It was, and remains, a Renaissance masterpiece. 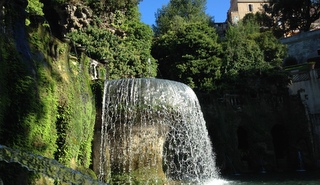 Our Wilds of Abruzzo tour will run in 2017 from October 3-11.  This is a beautiful time to visit this part of Italy as the ancient beech forests where we hike are turning red and gold and the landscape is at its most stunning. We visit the garden with Rachel Potts, who is an old friend to Hedonistic Hiking, and an excellent independent guide in Rome who can be contacted by anyone with a few days to spare in the Eternal City and wanting to learn more of its cultural and artistic treasures.