Submitted by HedonisticHiking on 4 May 2017

Anyone spending a few days in Southern Italy might like to take some time to visit the impressive Greek temples at Paestum.  This remarkable archaeological area is a UNESCO World Heritage site and lies about a mile inland, on the Mediterranean side, south of Naples and the city of Salerno.

Poseidonia, as it was first known, was founded by the Greeks from Sybaris around the 6th century BC. In 273 BC the site was colonized by the Romans who continued to build and develop the area, at the same time changing its name to Paestum. By the 9th century AD it is believed that a combination of malaria and violent raids by the Saracens destroyed the population and the site was abandoned. Almost 1,000 years passed before the ruined city, by then covered in thick forest, was rediscovered and serious excavation work started in 1907, managed by Vittorio Spinazzola, the director of the Museo San Martino in Naples. 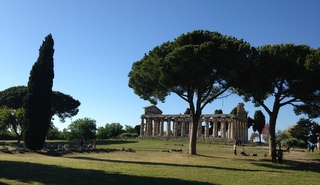 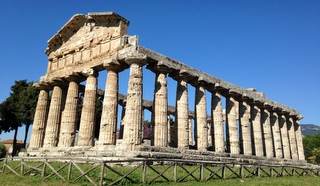 Views of the Temple of Athena

Much of the site today marks out the foundations of the Roman town: its market place, amphitheatre, thermal complex and two major thoroughfares which ran north/south and east/west. However, three Doric temples still stand which are among the best-preserved in all of Europe. At the northern end of the site is the Temple of Athena, (also known at the Temple of Ceres) which for a while was used as a Christian church. Further south is the impressively preserved Temple of Neptune, which is the most complete, with only its roof and parts of the inner walls missing. Alongside it stands the Basilica or Temple of Hera, the oldest of the three, and believed to have been a civic building when it was originally constructed. 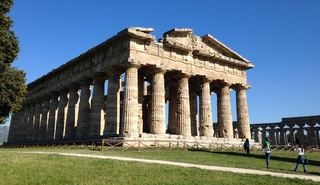 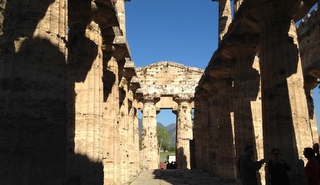 The perfectly preserved Temple of Neptune

On the eastern side of the city is the relatively modern Museum of Paestum which houses important finds from the site and surrounding areas including bronze artefacts, terracotta plates and Greek tomb paintings.

Paestum is reachable by train from Salerno, and therefore also from Naples with a change at Salerno, and there is also a bus which runs between Salerno and Paestum. If you have a car you would have time to explore the wide plain of the Piana del Sele which is where most of Italy's wonderful Mozzarella di Bufala cheese is produced, along with acres of strawberries, artichokes and olive groves. It is also the gateway to the Cilento coast and Cilento National Park, which is a wonderful area for hiking in Campania.  Those joining our Southern Italy tour will have the chance to see the area, along with a visit to one of the famous cheese farms.  We currently have 3 available spaces for the October 2017 departure. 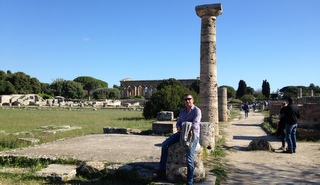 The foundations of the Roman city at Paestum