A Look Around Rotonda

Submitted by HedonisticHiking on 13 Dec 2016

Rotonda is a small medieval town located in the heart of the Pollino National Park in Basilicata, with a population of around 3,500 people. In 2017 a change to the accommodation on our Southern Italy tour means that we will have the chance to spend more time here than in previous years and to explore a few more of its important sites.

The Natural and Paleontological Museum of Rotonda is home to one of the region's most astonishing discoveries: the fossil skeleton of Elephas antiquus italicus believed to have lived between 400,000 and 700,000 years ago and discovered in the area of the Mercure Valley back in 1982. The skeleton is nearly 4 metres tall and 6 metres long and was preserved in the sediment of a former glacial lake.  Many other animal and plant fossils are on display, including remains of an ancient hippopotamus, bearing witness to the fascinating natural history of the area. 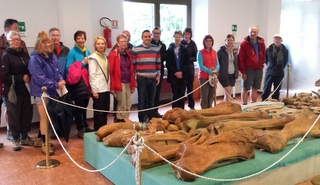 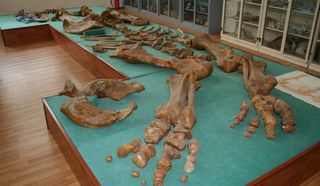 Two of the most important religious buildings in Rotonda are the oldest church in the town, built in the 12th century and called La Chiesa del Rosario, and Il Santuario della Madonna della Consolazione, which is nestled in the mountains about 1 kilometre outside the centre and accessed by a paved stone pathway. It was constructed between the years 1558 and 1574 and became an important site for the Rotondesi who came to give thanks to the Madonna for saving the town after a long period of epidemics.

Rotonda has two celebrated culinary ingredients which are not found anywhere else in Italy due to its unique soil and micro-climate. The first is its famous red aubergine, or Melanzana Rossa to give it its Italian name. Originating in Africa, they look a bit like tomatoes being both round and bright red but can be prepared in the same way as purple aubergines. Needless to say locals prefer them for their stronger and more exotic flavour. The second is the Fagiolo Poverello Bianco, a white bean with a delicate flavour, which is easy to cook and importantly has proved resistant to many parasites. Both products have the DOP status (the Protected Designation of Origin).

The new hotel we will be staying in, Il Borgo Ospitale, has been recently opened and is known as an "Albergo diffuso" - which means that it is scattered across various buildings in the town. Anyone who has travelled with us in Abruzzo will be familiar with this concept from the Albergo Sextantio in Santo Stefano.  Each of the rooms in two different buildings has been carefully renovated with all modern amenities, while the restaurant is housed in a third building.  The Spa and Wellness Centre is in a fourth at the end of the town, with a plunge pool, sauna and Turkish bath, which might be just what you need after some good hiking in the Pollino National Park! Guests can get from one to the other using the little courtesy motorised vehicle if they have had enough walking for one day! 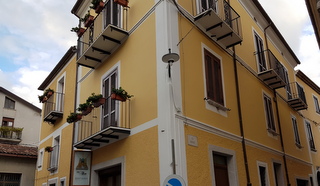 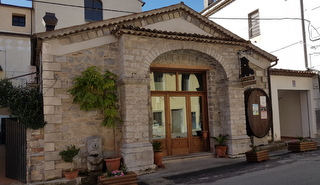 This is just one of three fabulous places to stay on our Southern Italy tour. We start in Maratea in La Locanda delle Donne Monache, which is a converted convent with its own pool, and we finish in the matchless city of Matera. Here we sleep in another "Albergo diffuso", Le Grotte della Cività, which literally has its rooms converted from the town's original cave dwellings and is an unforgettable place to stay. As Matera has been elected the European Capital of Culture for 2019 you might want to see it ahead of the crowds!

Our Southern Italy tour runs just once in 2017 from October 14th - 22nd and starts and finishes in the vibrant city of Naples.