Submitted by HedonisticHiking on 14 Aug 2018

In May this year we were fortunate enough to be joined for a few days by family friend, Mike Waller, on our tour The Wilds of Abruzzo.  Mike works as Conservation Ecologist for the London Wildlife Trust and is something of an expert in the field of orchids.   He has kindly shared some his extraordinary discoveries with us here in this article.  All photographs are by Mike Waller from his 2018 trip to Abruzzo. 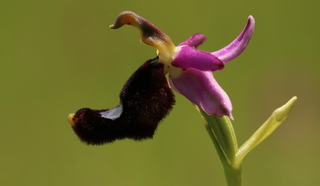 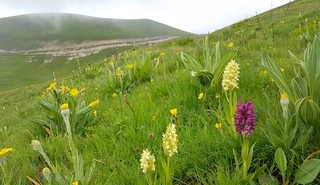 You might be forgiven for thinking that orchids are a luxury of the tropics, where warm rain and equatorial sunshine nurture large blousy blooms. Or you might be more familiar with seeing them at your local garden centre, a tempting purchase for your kitchen window sill.

And you’d be right… sort of.

But orchids don’t just reside in exotic rainforests and shops. They also thrive in the cooler parts of our planet and even onto the frigid arctic tundra. It may not be surprising therefore to discover that Italy, and particularly Abruzzo, is home to some 50 species specialising in the lofty woodlands and meadows which cover this unique corner of Europe. 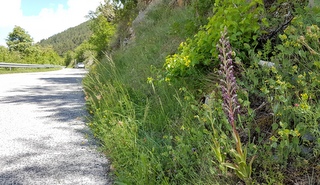 Drive along any country lane for long enough in spring-time Abruzzo and you’re bound to spot orchids growing happily along the woodland edges and verges, gently swaying as the Maseratis blast by. The tall colourful spikes of multiple flowers are distinctive and often clearly visible, once you’ve ‘got your eye in’. Often more than ten species can be seen growing together in a patchwork of other wildflowers.

The most commonly encountered Abruzzo orchid is undoubtedly the green-winged orchid (Anacamptis morio) – a small but perfectly formed rich violet species with thick green-veins along the sepals which point outwards like wings (hence the name). Those from elsewhere in Europe may know this species well. In the UK, it can occur en masse in favoured ancient meadows where the plough never left its destructive mark. 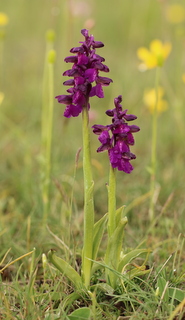 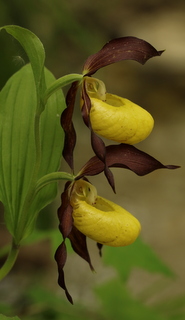 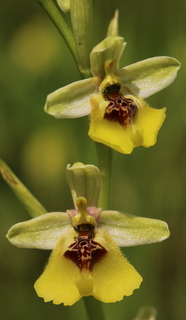 Look a little closer however and you will find other orchids…  High in the alpine pastures of the Gran Sasso National Park, the rugged limestone plateau rolls majestically through open plains giving the region its alternative name of ‘Little Tibet’. This harsh landscape is locked in ice and snow for five months of the year but, come May, the grasslands erupt into flower. Most conspicuously amongst the melee of colour is the elder-flowered orchid (Dactylorhiza sambucina). This is a true mountain specialist, found no lower than 1,500 m above sea level where snows linger well into the summer. The squat chunky spikes are unusual in that they come in two contrasting colours – custard yellow and deep magenta. This isn’t by chance. The dual colour technique dupes unwitting bumblebees into visiting one colour before giving up and trying the other and so maximising pollination.

Travel further south to the small unassuming riverside nature reserve of Camosciara and you may just glimpse Abruzzo’s rarest and most spectacular orchid. Here, clinging to the banks of the crystal clear river, is the lady’s-slipper orchid (Cypripedium calceolus). In Italian it is known as la scarpetta di Venere, literally meaning ‘the shoe of Venus’. This species is rare across Europe and is heavily sought after for collections on account of its unique beauty, so much so that in the UK only one plant now survives on a secret hillside. The big leafy spikes bear one or two huge flowers comprising a single bulbous yellow sack and twisted crimson sepals above broad lush leaves. 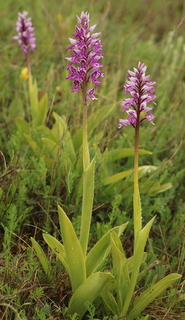 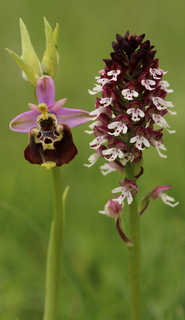 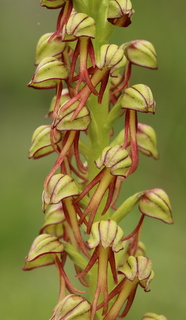 Come to Abruzzo and take in the views but don’t forget to look down and uncover a different world - one where evocative names such as early-spider, military, lizard, burnt-tip and naked man belie the huge diversity of form and colour found in this mesmerizing family of plants.

All our spring and early summer tours bring us into contact with a beautiful selection of wild flowers and it is one of the great pleasures of travelling on foot, having time to stop and study them in detail. If you fancy walking through fields of spring flowers take a look at our tour dates for next year and get in touch!