On the Culture Trail 2

Submitted by HedonisticHiking on 2 Nov 2018

In many ways our tours are much more than walking holidays in Europe.  Alongside the excellent hiking we delve into the culinary traditions of the areas we are walking, but we also work hard to include cultural highlights too and all our hikes have moments of special interest. Here we explore three more memorable experiences for our 2019 tours for culture seekers from around the globe.

This Level 5 tour takes us over the mountains from Provence to Piedmont, exploring the pristine national parks of the Mercantour and Maritime Alps. It offers some of the most spectacular scenery on any of our hikes and, as it runs in June, the landscape is decorated with stunning wild flowers. The National Parks work hard to protect the area's abundant wildlife and we often see ibex, chamois, marmots and birds of prey whilst hiking.

As we arrive over the border onto the Italian side one of our most interesting visits is to the unexpected Santuario di Vicoforte. The town of Vicoforte is small, with a population of only 3,000 people, but it is home to one of Italy's greatest architectural masterpieces. This sacred complex was commissioned by Carlo Emanuele I di Savoia on a well-known pilgrimage site and work was started in 1596.  It took many centuries to extend and complete the project but it was architect Francesco Gallo who, in the early 1700s, designed the enormous elliptical dome: 74 metres high and 36 metres in diameter.

It remains today the largest elliptical dome in the world and the interior is richly decorated in the Baroque style, with over 6,000 square metres of frescoes.  On December 15, 2017, 65 years after her death, the remains of Queen Elena of Savoy were transferred from Montpellier in France to the chapel of San Bernardo inside the sanctuary. Two days later, the remains of King Vittorio Emanuele III of Savoy were transferred from Alexandria, Egypt, where he had died in exile, to be buried alongside his wife. 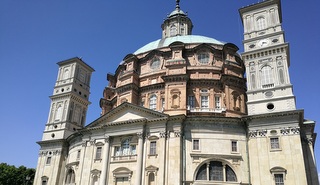 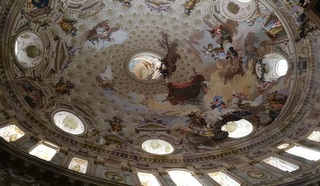 The Statue Stele Museum in Pontremoli is a visit we make on our Parma, Tuscany and Ligurian Sea tour. The statues are ancient abstract represenations of male and female figures, carved from sandstone, and are believed to have been made between the Copper and Iron Ages. Most of the finds were discovered in the Magra river valley and later collected and curated to be displayed together in the historic castle in Pontremoli. The meaning of the statues is still debated. They could have symbolic or religious meanings, or they could represent key living or dead members of the community who would have had important social status.

This is the very heart of the Lunigiana, a region of Tuscany which remains enigmatic and mysterious. It lies between the Apennine mountains and Apuan Alps which made it an important crossing point of ancient cultures, Roman armies and medieval pilgrims and merchants. The castle itself dates back to the year 1000 and over the centuries has been used as a military barracks, a school and even a private house! In the last 30 years it has been almost completely renovated, but it keeps a reception point for pilgrims travelling along the ancient Via Francigena.

We love this part of Tuscany, which is perfect for hiking off the beaten track, as you can walk surrounded by castles, isolated towers and fortresses which remain hidden in these beautiful hills and green valleys. 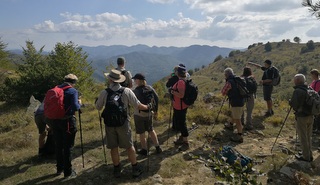 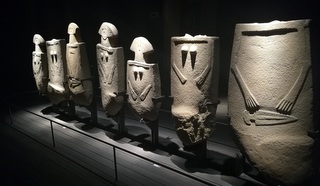 Biccherna is the Italian term used to describe a small painted wooden panel,  which would have been commissioned as a cover for public ledgers or important state documents chiefly between the 13th and 17th centuries. The best artists of the community of Siena were approached to decorate these unique tablets and they took their name from the government agency that originally commissioned them, La Biccherna.

On our Tuscan Harvest tour we spend a day in Siena, one of Tuscany's most historic and beautiful towns, and home to the world-famous Palio horse race which is held twice each year in July and August. One of the visits we like to make is to see these extraordinary artworks, around 100 of which are today housed in the State Archives. Over time the themes of the wooden covers developed to include allegories of the religious and political life of the Sienese, and even specific historical events like earthquakes, giving a fascinating insight into the daily life of the city. After Siena was defeated by Florence in 1555, fewer panels were commissioned and this style of painting gradually went into decline. However, they remain a unique artisic treasure and our guests are always intrigued to see them.

Today, around 105 of the surviving tablets have been collected together and are on display in Siena's State Archive, housed in the Palazzo Piccolomini, one of the most important Renaissance palaces to be built in this remarkable city. 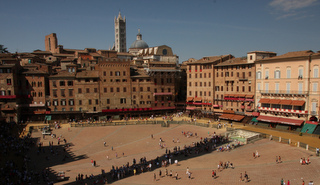 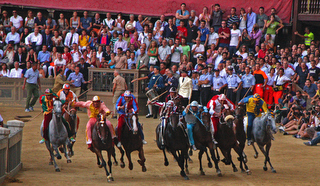 To share in any of the walking, culinary and cultural experiences of a Hedonistic Hiking tour in 2019 you have only to get in touch.  Tours are filling fast for next year so don't wait too long!