Perhaps less well-known to the many visitors who come to see Florence, Pisa and Siena, Lucca is a cosy and civilised Tuscan city totally encircled by its historic walls. The walls were orginially built in the 1500s as fortifications for the city defenses but, today, they are purely decorative, making a glorious, tree-lined, four km boulevard enjoyed by visitors and residents alike offering a bird's eye view over the city. 2013 has seen the five-hundreth anniversary celebrations of the walls with 500 events taking place in and around the city. 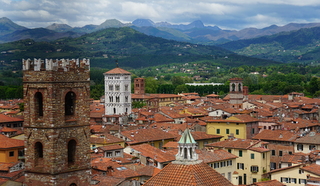 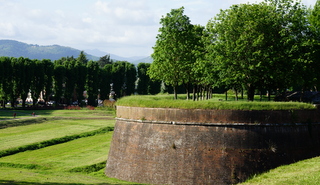 Lucca has Roman origins and was the administrative capital of Tuscany for a period in the Dark Ages. It became an important trading town and was above all famous for its silk business. In the 14th and 15th centuries Lucca was one of only two independent republics in the Italian peninsula but that status came to an end in 1805 when Napoleon gave the republic to his sister Elisa who ruled as its princess. Later Napoleon's widow Marie Louise took control and her son sold it to Leopold II of Tuscany in 1847.

Today the centre is largely pedestrianised and most residents get around on foot or on bicycles. It is easy to hire bikes to explore the city, but one of the best places to cycle is along the top of the walls. For lovers of art and architecture there are the Duomo of San Martino and the church San Michele in Foro to explore, both wonderful examples of the Pisan Romanesque style. For garden-lovers there is the exquisite Palazzo Pfanner which boasts a fine 18th century garden as well as the Botanical Gardens which offer a green oasis inside the walls of the city.  Music lovers will know perhaps that Lucca is the birthplace of Puccini. He was born in Via di Poggio where his house is now a small museum and his musical career started as a choirboy in San Michele. Due west of Lucca, the small town of Torre del Lago hosts a Puccini festival each summer in the months of July and August.

Easy to miss is the old Roman amphitheatre which was remodelled over the centuries to make the perfect oval of medieval houses which it is today, but the outer walls still show traces of the orginal roman arches. For us it is a picture-perfect piazza with shops, cafes and resaurants and it is hard to imagine its gladiatorial history.  One final striking landmark which should not be overlooked is the Torre Guinigi, the tower adjacent to the family palace of the same name which has a tree growing out of the top. You can climb the tower for a great view of the city and the Apuan Alps beyond.

Lucca is less than 30 minutes drive from Pisa and it can also easily be reached by train from Pisa and Florence. People travelling to Tuscany with free time before or after a tour should consider a visit as it is an easy place to stay with an excellent selection of hotels and restaurants. For 2015 we have a brand new tour running 13th - 21st May:  Lucca, Volterra and the Island of Elba.